One of the best biking trails in the region is the Pine Creek Rail Trail, which was identified in USA Today as one of the “10 great places to take a bike tour” in the world. This 62-mile-long hiking and biking trail travels through the Pine Creek Gorge starting 3 miles west of the Penn Wells at the Junction of Routes 6 and 287. The biking trail is a hard-packed gravel surface available to hikers and bikers. Equestrians can enjoy a section designed just for horses that runs alongside the gravel cycling path. There are multiple easy-to-reach access points along the cycling trail, and the going is not too tough, even for children and beginner cyclists. The biking trail winds through the many hills surrounding it, with only a 1-2% grade over its entire length.

Once the Rail Trail connects with Pine Creek near the Ansonia trailhead (about 5 miles from the 287 trailhead), it hugs Pine Creek on its journey south, providing great views of the water and rock outcrops. The Rail Trail is a great place to immerse yourself in wilderness. Keep your eyes peeled and you just might see the striking flash of a bald eagle’s white head as it scans the river for dinner. Whitetail deer, fox, beavers, raccoons, opossums, and the occasional black bear may also make an appearance. Along the way, occasional country inns, restaurants and bars, ice cream shops, and general stores appear and offer a great chance to stop and take a break with a cold drink in the relaxing small-town community atmosphere so many of our guests seek.

Riding along the creek, you’ll be on a route that is historically important to the development of this area. The Seneca Indians used the Pine Creek Path as a link between the Great Shamokin Path along the Susquehanna River and the Iroquois settlements along the Genesee River in New York. The route was first developed for commercial use in 1893 when the Jersey Shore, Pine Creek, and Buffalo Railway built railroad tracks to service area sawmills during the great timber boom of the turn of the century. Ownership and use of the corridor shifted multiple times between timber, coal, and other industries, and ended in October 1988 when the last Conrail freight train passed through.

Almost immediately the Rails to Trails Conservancy began lobbying the state legislature to acquire the route for recreational development. After some discussion the trail was purchased from Conrail for a whopping $1.00. The Pine Creek Rail Trail opened in 1996 and follows the river for all but seven miles of its route, passing through two state forests (the Tioga to the north and the Tiadaghton to the south) and many beautiful wilderness scenes.

For guests staying for multiple days of cycling, many of the area’s State Parks include paved cycling trails, as well as off-road biking trails for experienced mountain bikers.

Pine Creek Outfitters is located near the Ansonia trailhead. They offer bike rentals and a shuttle service for those that want to ride twice as far down the trail and get a shuttle ride back to their car rather than needing to double back on bike. Reservationists at the Penn Wells can help you make these arrangements, or you can reserve directly with Pine Creek Outfitters on their website. 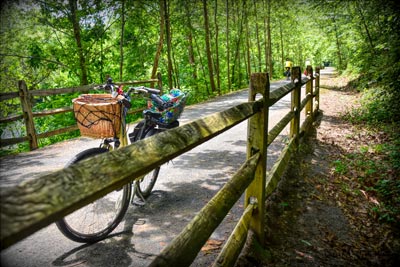 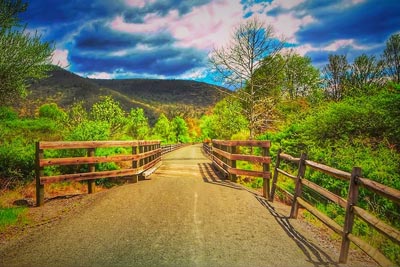 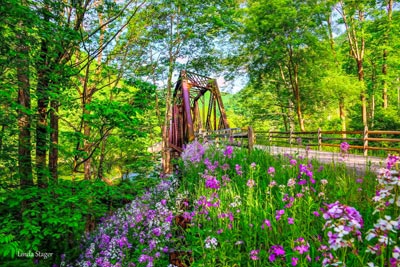 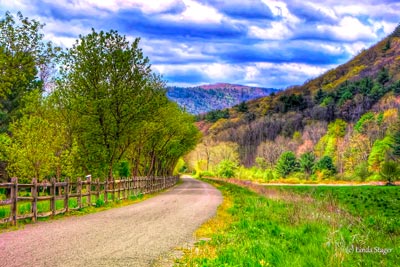